After a year of 2021 in the form of fashion shows and interactive events, 2022 was full of surprises. Focus on 12 looks that inspired us.

These two years of confinement allowed many designers to develop their ideas. The fashion public could not help but be delighted by the new looks that appeared this year. Focus on the 12 looks that will be remembered in 2022.

At the Christian Dior Fall Winter 2022 show, Rihanna revealed her baby bump in a lace and openwork look. The woman who assumes her shape, even with a round belly, opens the way to a new generation of pregnant women, who have not stopped showing their bellies since. 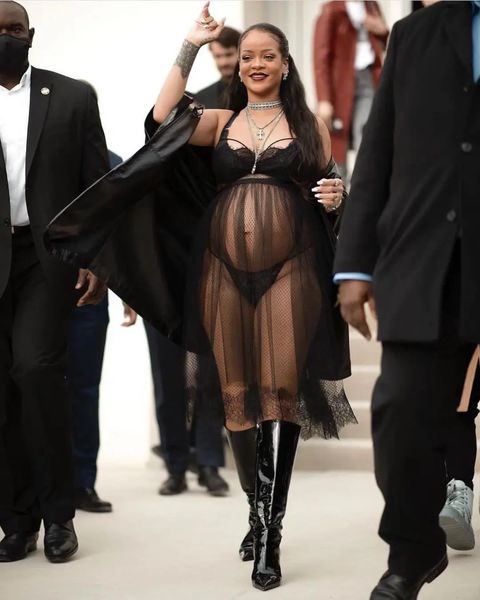 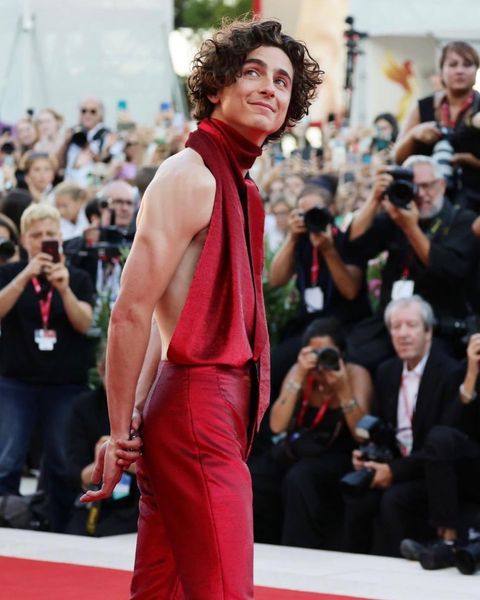 We saw it at the Venice Film Festival, a red halter top by Haider Ackermann, worn by Timothée Chalamet in all his glory. Androgynous, surprising, retro and at the same time contemporary, he embodies this new generation of actors who do not differentiate between the genders in their ways of dressing.

Kim Kardashian showed up at the Met Gala wearing no less than the dress Marilyn Monroe wore when she sang “Happy Birthday Mr President” to John F Kennedy in 1962. She became the only celebrity to persuade the Ripley’s Museum to lend her the multi-million dollar dress. Kim Kardashian made history. 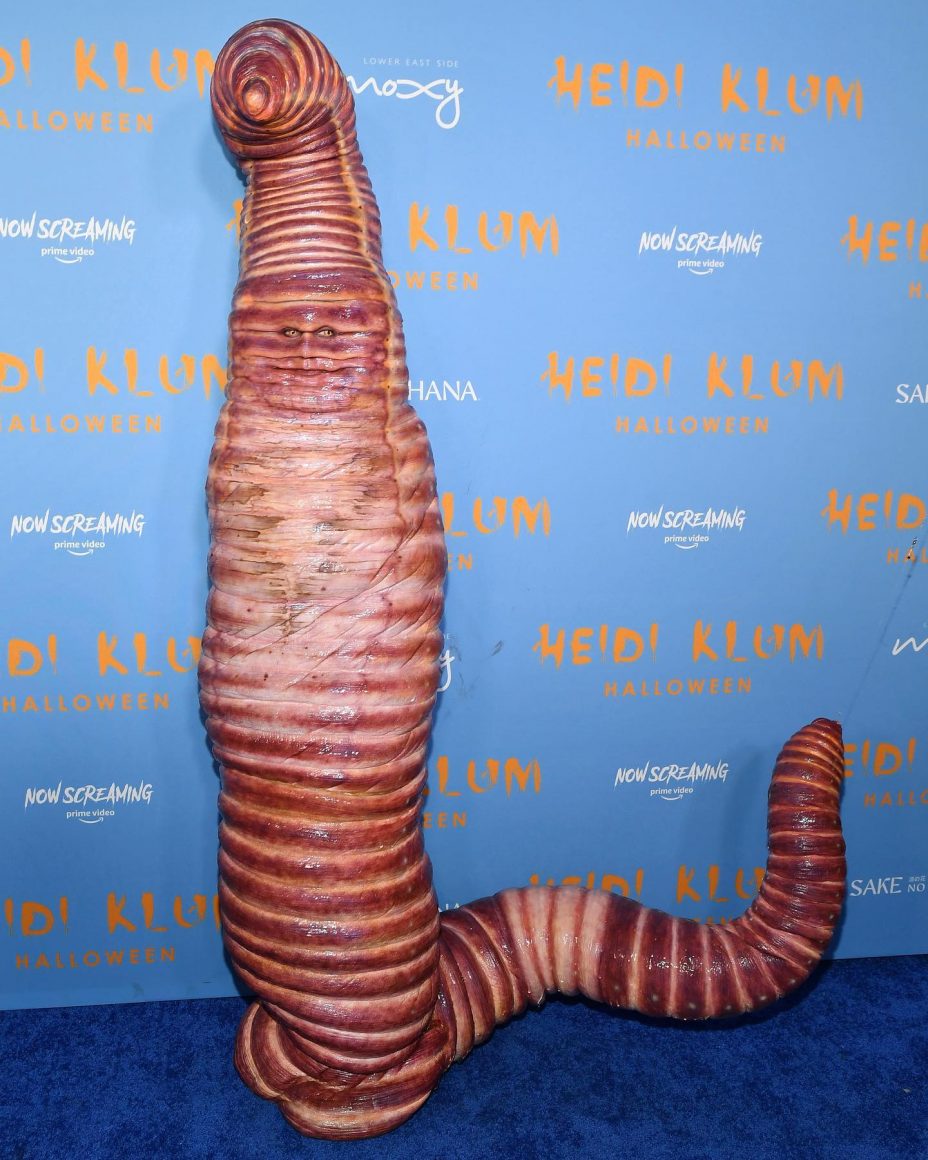 Pink, pink, pink. The Italian fashion house Valentino brought pink back into the limelight at its show in Rome this summer, and it was the colour of the year. When the grey winter appeared, pink warmed our hearts. We spotted Emmanuelle Khanh’s sunglasses on a street corner, Prabal Gurung’s pantsuit or Avellano’s vinyl jumpsuit. 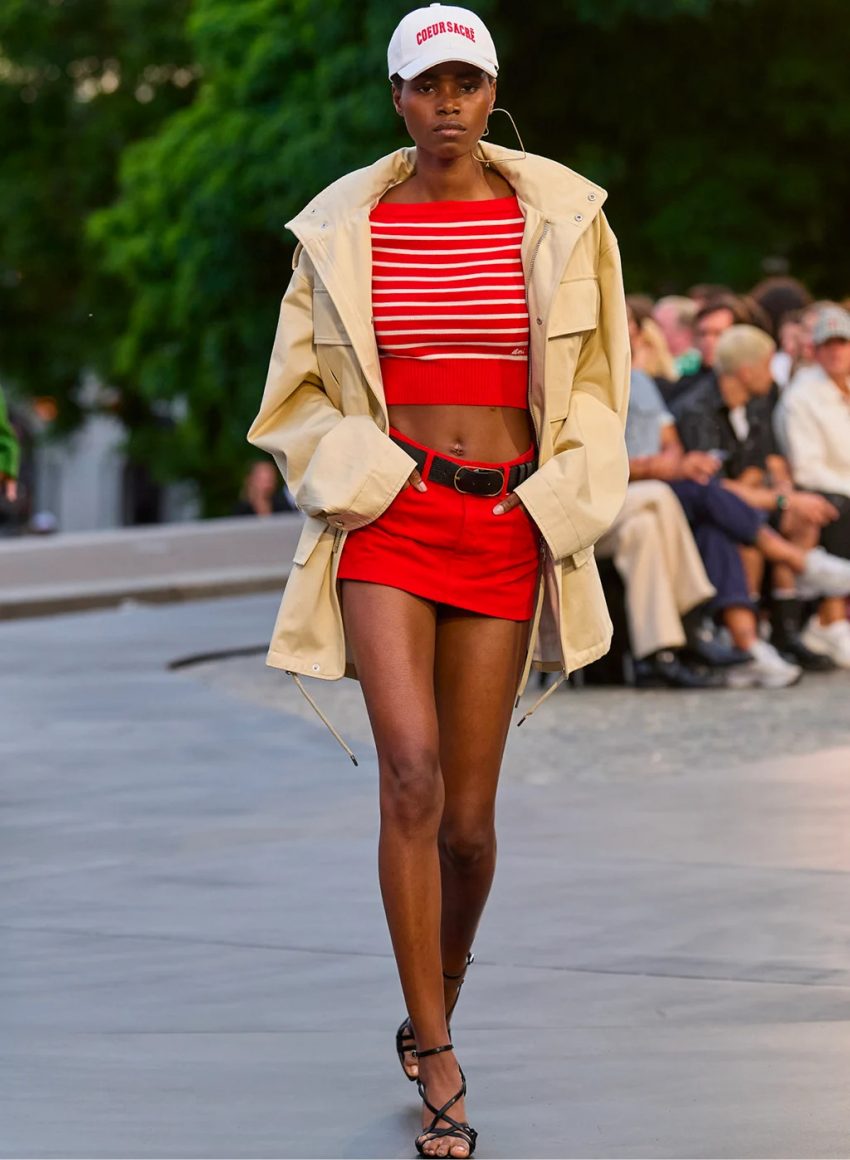 From big names like Miu Miu, Céline, Diesel, Courrèges to lesser known names like Etro, Ami or Cynthia Rowley, the mini skirt was everywhere. The mini is renewed and is part of the continuation of the trend of the years 2000 and “preppy” which we have not finished to hear about this year.

Worn by many celebrities such as Timothée Chalamet, Oscar Isaac, Bad Bunny, the skirt breaks the boundaries between the two sexes. More comfortable, less taboo, the male skirt has become a symbol of modernity. As for women, they have started to wear trouser skirts, like their male counterparts, they break the codes. 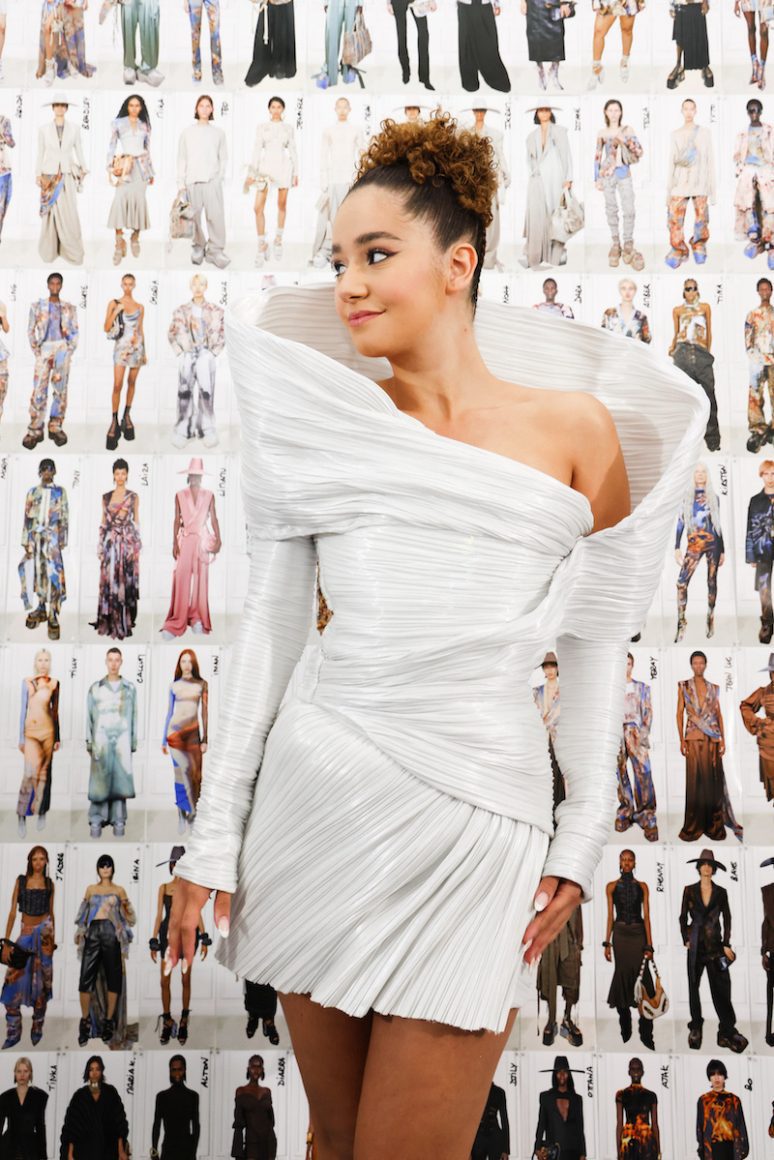 During Paris Fashion Week in September 2022, French influencer Lena Situation was spotted wearing a Balmain dress made from 100% recycled plastic bottles. Many fashion houses are aware of the ecological problems associated with the fashion industry.

To counter this phenomenon in their own way, they are looking for innovative methods and materials, whether it is Marine Serre, who recycles and assembles several scarves to make a dress, or the recovery of fishing nets transformed into ECONYL fibre for the bags of the brand Wants Les Essentiels.

The plus size outfit

The fashion industry is increasingly becoming a reflection of our society. The Ester Manas brand celebrates all women and all sizes. As one of the few brands to show at fashion week with more than half of their models being plus size, they are leading the way for the big houses to vary their designs to reflect the world around us. We could also mention the so-called “plus size” brands Penningtons, Lachapelle Atelier, Nana the Brand, Loud Bodies and many others… 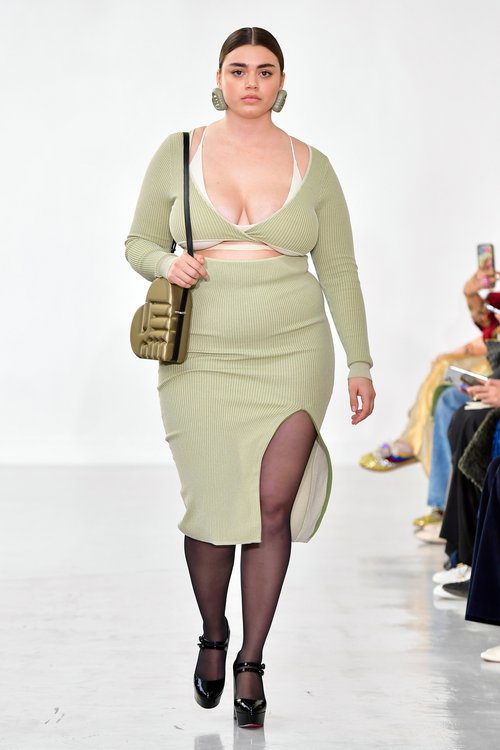 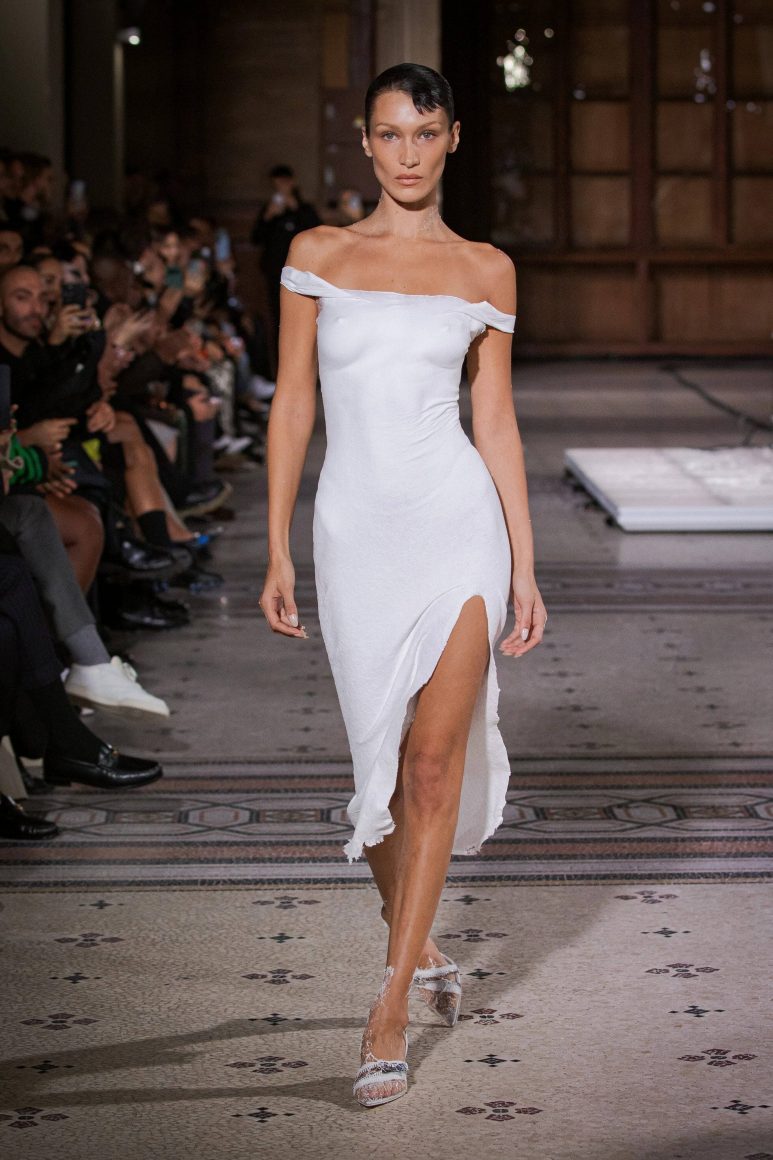 The spray dress by Coperni

You had to see it to believe it. In the textile room of the Musée des Arts et Métiers in Paris, the French brand Coperni created a spray dress on the model of the year: Bella Hadid. This sprayed material is cellulose which, when in contact with the skin, forms a textile. It is an innovative material because it is found in nature in large quantities and is biodegradable, which makes it a very ecological material.

At the MTV Video Music Awards in Newark, New Jersey, American rapper Lil Nas X made a statement with his eccentric black peacock feather outfit. Made by the designer Harris Reed, promoter of the “gender fluid”, this outfit breaks the codes between feminine and masculine. With a large high-waisted skirt and a feather headdress, the rapper, who is not very fond of the traditional dinner jacket, caused a sensation. 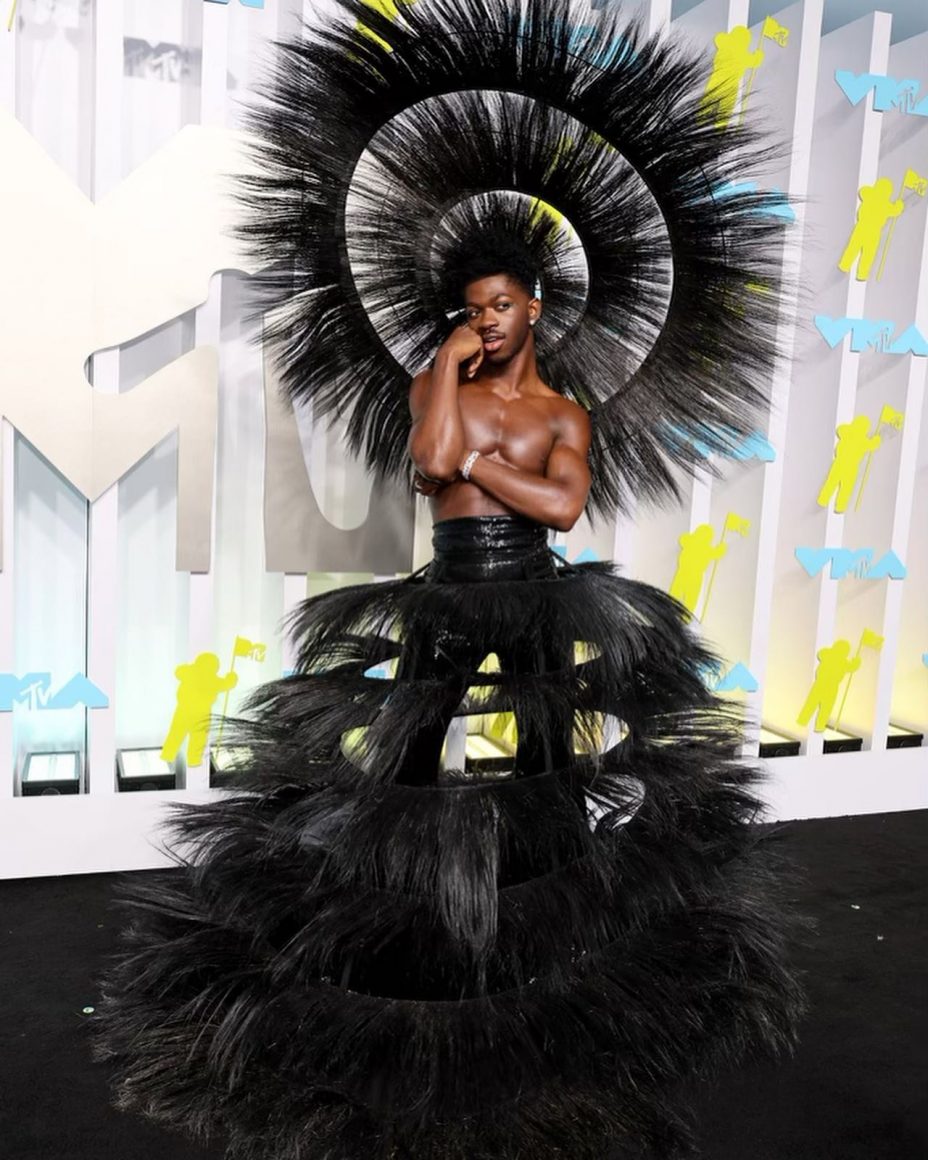 Dua Lipa took on the New Year with a transparent and glittery silhouette. The young singer wore a dress designed by Ludovic de Saint-Sernin for his “Mirage” spring/summer 2023 collection. Saint Sernin is a French designer who lives and works in Paris. He launched his label in 2018 which makes it a young brand. The vast majority of his designs are made in France. This talented and promising designer is one to watch closely.

We hope that this year 2023 will bring us as many beautiful surprises in this world of fashion, which is as crazy as it is creative.

All the spring trends at hand

Manage Cookie Consent
To provide the best experiences, we use technologies such as cookies to store and/or access device information. Consenting to these technologies will allow us to process data such as browsing behaviour or unique IDs on this site. Failure to consent or withdraw consent may adversely affect certain features and functions.
Manage options Manage third parties Manage vendors Read more about these purposes
View preferences
{title} {title} {title}